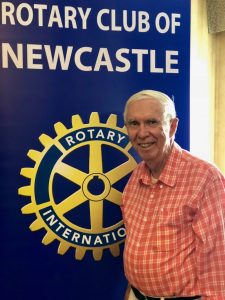 Charlie Hubbard believes that “We need to thank those that have helped and influenced us”.  Inspiring words from the Rotary Club of Newcastle longest standing member. After school, Charlie attended the University of New Brunswick Fredericton on full scholarship and completed 3 degrees. He then became a teacher at the university helping teachers improve on their classification. In his late 20’s Charlie started a school in Red Bank, NB. In 1961, he graduated from the Royal Canadian School of Infantry and served briefly with Canadian Guards in Germany and later as a platoon officer, quartermaster, adjutant, company commander and Deputy commander of 2 Royal New Brunswick Regiment . In 1963, he began his career at Harkins High School in Newcastle and also taught at North and South Esk Regional High School in Sunny Corner, New Brunswick. He was the first principal of Miramichi Valley High School. He was also a member of the New Brunswick Teachers Association, the Principals Council, and the National Association of Secondary School Principals. He is a former member of the House of Commons of Canada, representing the riding of Miramichi.