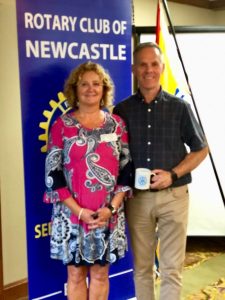 Elected to Parliament in October 2015, Pat Finnigan proudly represents the riding of Miramichi-Grand Lake. Pat is the Chair of the Standing Committee of Agriculture and Agri-Food and sits as a member of the Standing Committee of Fisheries and Oceans. Mr. Finnigan spoke about the Federal Government’s initiatives on infrastructure spending in Miramichi. As well he updated the members on current issues such as employment insurance eligibility, senior care and cannabis legalization. Thank you Mr Finnigan for taking time out of your busy schedule to meet with our members. Shown thanking Pat is fellow Newcastle Rotarian Geri Mahoney.